Charlie Strong -- The Coach of the future?

.
He came to Louisville at one of the lowest ebbs in Louisville Football history. The gridiron giants were getting dwarfed by the rest of the BIG EAST. They were on a three game losing streak to cross-state rival Kentucky. Steve Kragthorpe had disillusioned a fan base, the Cards hadn't "been bowling" since his arrival and Cardinal fans had had enough.

Enter Charlie Strong. The bridesmaid. The perpetual "candidate not chosen". A strong coaching resume, Florida contacts and a dynamic speaking style. Cardinal fans weren't quite convinced, though. They'd been down this path before.

Strong brought in a close group of assistant coaches. He wore out the public speaking circuit, challenging Cardinal football fans to renew their hope. There were gaps to fill in the program, issues to address and seats to fill in Papa John's Cardinal Stadium. The prevailing attitude amongst Cardinal fans was "Well, it can't get much worse...can it?"

Charlie spoke of a long term plan to get Cardinal Football back to the top of the BIG EAST standings. Warned us it wouldn't happen overnight. Informed us that he would install a winning attitude in the current and future players. It all sounded good.We'd heard it all before, though.

And, the Cards did return to a over .500 season in his first year. A dramatic win in the Beef O' Brady Bowl over a C-USA opponent in Southern Miss. Getting one of the best quarterbacks in Florida High School football to commit to Louisville. Plenty of other Florida guys were buying in also. It may have been a 7-6 first season record...but to Louisville fans, it was nirvana.

Season two brought more improvement. A win over Kentucky. The development of Mr. Bridgewater and a wealth of talented wide receivers and running backs to accompany him. Another bowl bid...a narrow loss in chilly Charlotte, NC to an ACC middle-of-the-pack school but a second straight bowl game. No longer the second best team in the state. Bigger, faster, more heart and another season over .500. 7-6? The Cards would take it...not satisfied it with but seeing it as another building block in the construction. They went to West Virginia, beat the Mountaineers and looked good in doing it. 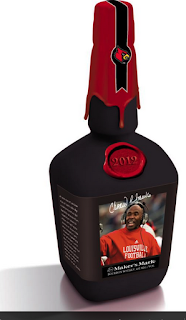 Season three saw defensive coordinator Vance Bedford imploring Cardinal fans to "get on the train." A revamped defense, an offensive line that didn't serve as a punch line to a joke. Teddy confident, blossoming into a quarterback that was drawing praise nationally. Pre-season pick to win a temporarily hobbled BIG EAST.

We're two games into this season and two victories notched. A domineering win over the faltering Kentucky Wildcats. A sound thrashing over Missouri State. An offense averaging almost five touchdown a game and a defense allowing less than two.

A horse racing betting theory implies that one should watch out for a horse making its third career start. Especially if the first two showed a little improvement from the first to the second. The same philosophy can be applied to this third-year plan of Charlie Strong for his Cardinals.

Saturday, Sept. 15th. could very well prove to be the acid test for this Cardinal squad. North Carolina comes into Papa John's Cardinal Stadium smarting after a totally unexpected loss to Wake Forest. A Cardinal team looking to show their level of improvement by beating a TarHeel team that effectively shut them down 14-7 last year in Chapel Hill.

We'll see just how far the train that Vance Bedford wants us to board has progressed down the tracks next Saturday. A win could pave the way to a 6-0 UofL start...with patsies FIU, Southern Miss and Pitt next. Road games, yes. Winnable? Yes. And, three straight at home after the road trip.

Charlie, the green light is on and the tracks are clear. How far will this train go? A chance to accomplish something that hasn't been seen in Cardinal football history since 2006...when the Cards started off 8-0.
A chance to fast forward the timetable. 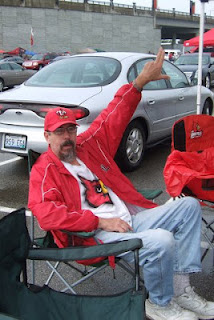 Is Charlie Strong the coach of the future? How many schools will come after the coach, waving more dollars, more prestigious conference affiliations and larger stadiums? The Cards have been traditionally been a stepping stone for aspiring coaches to upgrade (see Howard Schenellenberger, John L.Smith, Bobby Petrino, Vince Gibson and Lee Corso). Past performances have shown that leaving Louisville isn't always in a coaches' best interest. Motorcycles, bankruptcy, failure and goofy appearances on ESPN could happen.

The train could turn into a vehicle of opportunity for the coach who had been been kissed before accepting the Louisville head job. We hope not. Charlie speaks of his love and commitment to the community. He'll speak just as quickly about his daughters' volleyball experiences here in Louisville as he will about the Cardinal defensive strategy. How many third-year coaches have had their face plastered on a Maker's Mark
commemorative bottle (beside Billy Gillespie...whose lips were permanently wrapped around one?)

If they offer, will Charlie go?


Standing on the brink of possible brilliance, ready for the national recognition that behooves success...with feet firmly planted in the now, Charlie Strong is at a crossroads of sorts. In which direction he'll go is hard to say...but, for now, his current path has him strolling down the red and black highway and not consulting a GPS on On-Star.